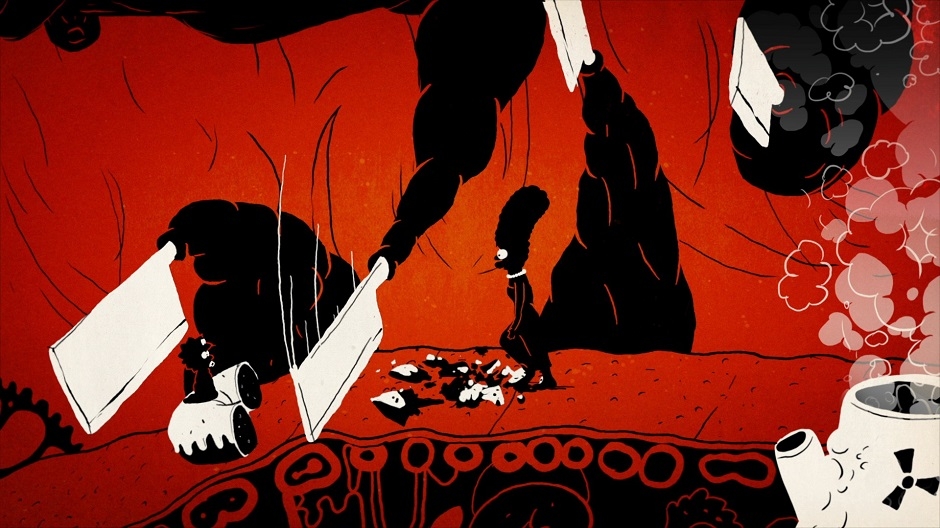 Text from from wired.co.uk

” The Simpsons reveals the latest in its series of stealth animation showcases, with Polish animator and independent filmmaker Michal Socha providing the newest couch gag segment.

Socha’s short is an impressionistic journey through Homer’s brain, rendered in black and red, peppered with numerous visual gags long time fans of the series will appreciate. It will head up the episode ‘What to Expect When Bart’s Expecting’, which airs in the US this Sunday.

The aesthetic of the piece is a deliberate return to the style of Socha’s short film Chick. Released in 2009, Chick was an award winner at numerous festivals, including the prestigious Annecy International Animated Film Festival.

Michal Socha is something of an indie darling, having gained a following on the festival circuit. His works first came to mainstream attention in the English-speaking world with his animated credits for the 2010 television mini-series Pillars of the Earth, an adaptation of Ken Follet’s historical novel.

Socha’s piece follows couch gags by Ren and Stimpy creator John Kricfalusi, Triplets of Belleville director Sylvain Chomet, and New York Times cartoonist and independent animator Bill Plympton in adding some creative flair to the opening credits. Socha is by far the most obscure artist to contribute yet, though we’re loving the new sense of experimentation The Simpsons is exhibiting with its guest animators in recent years.

Animation World Network has a lengthy interview with Socha, discussing his involvment in the show.”  link to article wired.co.uk